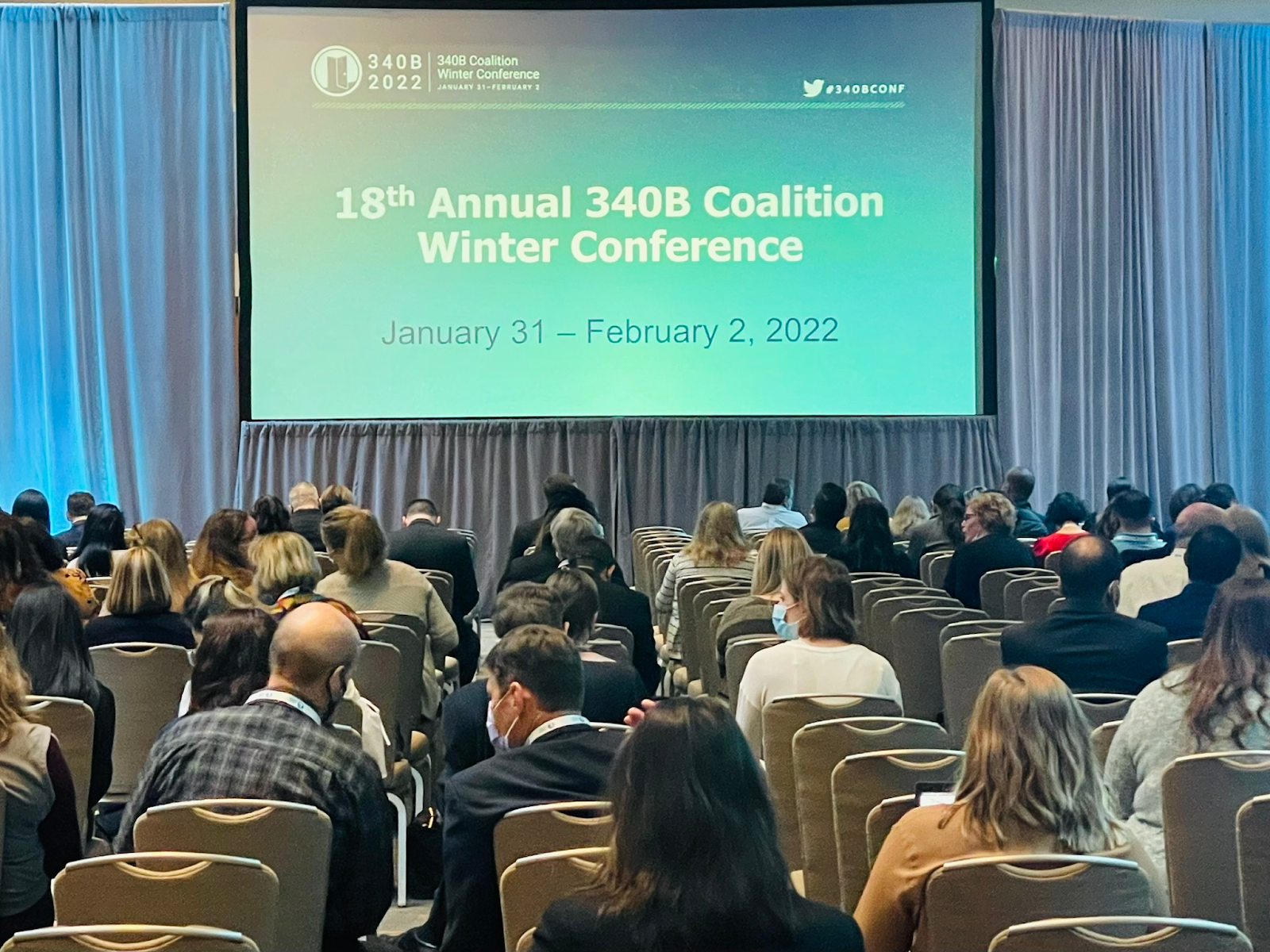 As hundreds of 340B stakeholders traveled to sunny San Diego this past week for the 340B Coalition Winter Conference, it was refreshing and exciting to finally attend the in-person 340B meeting after two years of virtual meetings. After all, there is no substitute for meeting face to face (or, more aptly, “mask to mask”)!

After only a few moments into the opening remarks, I immediately felt the energy in the air, which made recognizing friends and colleagues under mask-covered faces a minor hurdle to overcome. Clearly, this much-anticipated event was long overdue for many of us who rely on 340B conferences as sources of the most up-to-date information. It’s also an important opportunity to connect with other industry experts and colleagues. The hybrid virtual/in-person event did not disappoint.

As the 340B program reaches a fever pitch, imbued further by the contract pharmacy stalemate that continues to widen the divide between 340B covered entities and manufacturers, there are a few general themes below from the conference I thought were important to share.

It goes without saying that the pandemic significantly disrupted our lives and had a major impact on HRSA audit results.  As witnessed in the table below, a chart provided by 340B Health’s Maureen Testoni, HRSA audits, which were in large part performed remotely in 2020 and 2021, displayed a notable decline in certain findings that lead the way in previous years.

As a refresher, although not reported exactly within the chart below, HRSA findings for non-rural hospitals (subject to GPO Prohibition) fall into several key categories including Eligibility, Diversion, Duplicate Discount, GPO Exclusion, and OPAIS Database Accuracy. Since the inception of HRSA oversight activities back in 2012, there has been a steady trend of “Diversion” as a leading cause of findings. In the last two years, however, this trend has been replaced with a growing number of findings related to OPAIS Database Accuracy. 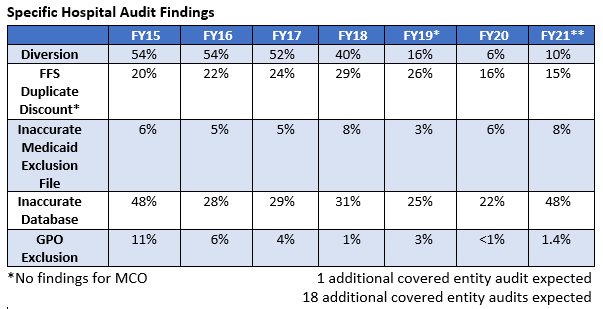 While we can certainly speculate several reasons why HRSA audit results trended the way they did, we believe the pandemic and use of remote audits had a big impact.  It’s important to note that these results are subject to a time lag between when the audit was conducted to when the results are published. It appears HRSA/Bizzell auditors focused more on compliance with proper registration of child sites, especially as it relates to the requirement of separately registering every department, clinic, and/or service in locations outside of the parent-entity four walls.

As for HRSA’s audit approach in 2022, it should be noted that HRSA/Bizzell Group will conduct 340B audits utilizing BOTH onsite and virtual audits in 2022 with a continued goal of two hundred audits per year. Alinea has participated in several onsite audits so far in 2022 and expects a trend toward more onsite audits as the year progresses given a reduction in COVID-19 surges.

During the much-anticipated 340B update from the Office Of Pharmacy Affairs, acting Director Michelle Herzog shared that HRSA will continue to grant registration and other flexibilities, such as expedited enrollment for contract pharmacies, allotted by the PHE Declaration. As a countermeasure to the COVID-19 spread, the Public Health Emergency (“PHE”) Declaration, which was first enacted on Jan. 27, 2020, provides administrative flexibility for healthcare organizations during a time of emergency. Although extensions are granted for 90 days, it’s unclear when these flexibilities will have a specific end date. However, the extension is definitely welcome news for all 340B covered entities that have been severely affected during the pandemic and we believe additional extensions may be warranted as COVID-19 variants continue to surface.

As the number of manufacturers prohibiting or limiting access to 340B drugs utilized in the contract pharmacy setting continue to grow, 340B covered entities (most notably rural hospitals such as critical access hospitals) are feeling the financial squeeze. This has been even further exacerbated by the demands of COVID-19 patient care. To add insult to injury, covered entities are now forced to juggle a multitude of complex and confusing conditions levied by drugmakers in order to limit access to their 340B drugs dispensed at contract pharmacies.

As the debate on manufacturer contract pharmacy prohibition rages on, 340B conference participants were encouraged by strong statements from 340B Health and HHS. In particular, U.S Assistant Surgeon General Krista Pedley, joined by Michelle Herzog, acting director of OSHI’s Office of Pharmacy Affairs (OPA), expressed support for 340B health care providers in the battle with drug manufacturers over accessing 340B pricing in the contract pharmacy setting.

In addition to Pedley and Herzog’s statements, 340B Health’s President and CEO, Maureen Testoni, also stated that 340B Health is prepared to advocate for a legislative solution in the dispute over contract pharmacy. While a preliminary sense of relief seemed to fill the air following said statements, it was also noted that the decisions by two federal judges to uphold contract pharmacy practices under 340B statute have all been appealed by manufacturers. And in further admission by Testoni, “We recognize that appeals can take a long time—one year or two years, and there are potentially other avenues.”

Closing Thoughts on The 2022 Winter Conference

The 340B Coalition Winter Conference in San Diego was a great start to 2022, which marks the 30-year anniversary of the 340B Program. Understandably, 340B program stakeholders are concerned about the direction that 340B has taken the last couple of years but remain hopeful that more encouraging news will be shared during the upcoming 340B summer conference in August.

And lastly, despite 2020 and 2021 audit result trends, as the HRSA/Bizzell Group returns to regular onsite audits, we urge covered entities to continue their diligence around 340B compliance as we return to times of normalcy and continued program scrutiny.

*Author Magdalena Ordon is a 340B Subject Matter Expert, 340B ACE and holds an MS in Economics and Corporate Finance. Magdalena has over 15-years experience as a 340B hospital system manager, 340B TPA Specialist, and pharmacy consultant, among other roles in healthcare finance. For more information on Magdalena’s background, please visit Alinea’s team page. If you would like to inquire further with Magdalena on 340B, or other pharmacy-related matters, she can be reached via email at magdalena.ordon@alinea-group.com.