340B Program Transparency, Calls for Reform a Dominating Theme of the 2018 340B Coalition Summer Conference 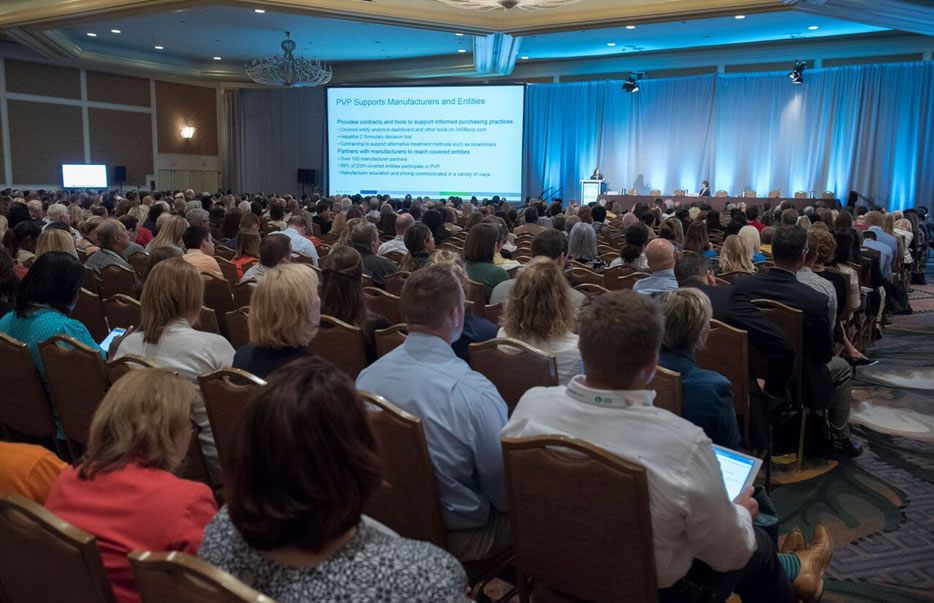 340B Program Transparency, Calls for Reform a Dominating Theme of the 2018 340B Coalition Summer Conference

Authors: Curtis Frazier, 340B Subject Matter Expert
Once again, the 340B Coalition Summer Conference did not disappoint! With one of the more intriguing lineups in years, the three-day, 22nd version showcased esteemed speakers Alex Azar, the current HHS Secretary, and notable political analyst and pundit, Amy Walters. The conference, held by 340B Health, brings together more than two-thousand stakeholders to our nation’s capital each year in an effort to share 340B best practices and discuss key legislative developments around the embattled drug regulatory program. In the wake of multiple bills proposing substantive changes to the 340B program, and amid rising scrutiny around the program’s intent in a more contemporary setting focused on reducing drug prices, the 340B community eagerly awaits new information that may provide insight around the program’s future. On hand for the 2018 340B Summer Conference, Alinea summarizes key take-aways and important developments from this year’s conference.

Kicking off this year’s summer conference, Health and Human Services Secretary Alex Azar addressed a standing-room-only crowd with a clear and concise message that 340B reform is “necessary”. Azar’s comments stated that hospitals and other providers in the 340B drug pricing program “who are responsibly investing their 340B savings have nothing to fear from the Trump administration’s proposals to reform 340B.” Additionally, Azar called for increasing transparency around the 340B program, as well as reducing the gap between what providers pay and how much they are reimbursed for drugs in the 340B drug discount program. Azar also told stakeholders that the ceiling price and penalties rule was not delayed out of deference to the pharmaceutical industry, but because the administration wants to reform the 340B program as part of its comprehensive approach. As a call to action, in response to the generally negative reaction from the covered entity heavy crowd in attendance, 340B Interim President and Chief Executive Officer Maureen Testoni followed Secretary Azar’s speech by urging 340B hospitals to speak out about the importance of the 340B program and their ability to serve low-income and rural patients. “More hospitals should reach out to their elected representatives and share information about how 340B savings lead to better care, we all have a story to tell and now is the time to share it,” Testoni said. For 340B covered entities, both Testoni and Azar’s comments speak to the importance of examining and measuring how 340B savings is used and extending further benefits to the community the 340B covered entity serves.

Coincidentally, the final day of the 340B summer conference coincided with a 340B hearing facilitated by the House Energy and Commerce Subcommittee to examine opportunities for program improvement. As a focal point of both the hearing and 340B Health summer conference, key discussions placed emphasis on the many draft bills that have been introduced in the House; in total, 15 bills are currently in draft format, in which many bills include 340B specific language. While it isn’t uncommon to have this many draft bills introduced in the House at a given time; especially during an election year, it does speak to the notable interest surrounding the 340B program. Despite the large number of bills being introduced, several industry specialists indicated that competing factors such as the recent supreme court justice nomination, summer recess, and upcoming mid-term elections will diminish the likelihood that any draft bills will make it out of the House in 2018. However, indication is that 2019 may be a very historic year as it relates to 340B reform. On the Senate side, there have only been two bills introduced. There is a large amount of 340B program discussion and reform interest among members of the Senate HELP committee, with a consensus that the 340B program is important and should be preserved if not modified to better reflect program intent. A notable inquiry raised during the 340B legislative update questions whether or not a 340B reform bill could pass as a single bill on its own. In response, it is believed that any 340B-specific bill would likely need to be attached to a larger bill in order to be passed in Congress. An additional question surfaced regarding the likelihood of a larger vehicle in which the senate could attach any of the proposed 340B reform measures through provisional elements within a larger bill focused on improving regulations involving pharmaceuticals. While the answer was not explicitly provided, the sentiment from the legislative update is that it is unlikely any major bills will be passed with the midterm elections later in the year. There could be a vehicle at the end of the year, such as a bill aimed at opiate reform; however, it is unlikely that 340B reform measures will be introduced into any of the important vehicles that have bipartisan support as they may “sink” the entire bill. Here are the 340B-related areas the proposed bills/drafts address:
N

Address oversight of manufacturers, including 340B "ceiling price" calculation integrity and adherence

One of the areas that seems to be gathering support by all 340B stakeholders, including manufacturers, covered entities, and governing bodies is the call for an increase in transparency. Both senators and house representatives would like to have more details to accurately gauge the impact of 340B in a standardized fashion on an entity-by-entity basis (i.e. Disproportionate Share Hospitals vs Rural Hospitals vs Grantee Organizations). The general sentiment is that complexities and differences between covered entity types, including available information sources, causes further challenges in evaluating program effectiveness. Consequently, there is a movement to develop the proper metrics for gauging the 340B Program across the entity spectrum. Questions raised, but not specifically addressed, include:
N

How big is the 340B program, how much of the market does 340B drug spend truly represent?

How much has the program actually grown, removing misleading factors such as changes in child site registration requirements?

How are 340B savings being utilized and reinvested to benefit the community?

How are indigent patients benefiting from the 340B program?

As the narrative continues, it was stressed that input from covered entities is paramount and necessary in the development of proper, meaningful metrics utilized to gauge program performance.

In an effort to ensure program integrity and promote President Trump’s policies to reduce drug prices and improve 340B program integrity, HRSA is currently evaluating all options when it comes to improving 340B oversight and monitoring. HRSA has taken measures to adjust audits and the workflows used during audits to ensure necessary controls and covered entity oversight are adhered to as stipulated by 340B regulations. HRSA recently published new guidance on its website requiring corrective action plan (CAP) implementation within six months. HRSA may also require entities to submit documentation proving CAPs have been implemented with the appropriate following to ensure issue resolution. From the manufacturer point of view, HRSA is required to collect information from manufacturers and verify 340B ceiling price, however it was disclosed by Captain Krista Pedley, Director of the Office of Pharmacy Affairs (OPA), that the portal for 340B entities to verify 340B pricing will likely not be live until mid-2019 citing that the portal would only have material value once HRSA can confidently publish ceiling price which will occur when Civil Monetary Penalty (CMP) policies are finalized.

In general, the Apexus update outlined progress around Apexus’s award-winning 340B ACE program and integrity tools CEs may utilize to verify 340B/PVP selling price has been loaded by distributors properly. Apexus stores about 20 historical months of pricing data, which is accessible by their member community. Additionally, Apexus will be rolling out additional tools focused on Medicaid, FTE calculations, and guidance around Use of Funds calculations. As a highlight, Apexus’ president, Chris Hatwig, shared that Apexus’s prime vendor contract pricing on all currently available biosimilars resulted in $26M in savings for covered entities! A considerable feat and win for both Apexus and 340B covered entities.

HRSA was onsite at the conference and presented changes and updates to 340B covered entity audits. Here are some tidbits we noted during the presentation:
N

HRSA wants to see both documentation and examples of contract pharmacy oversight. They want to see that the covered entity (not the TPA) is actively managing their contract pharmacies

Regarding the MEF, if you add an NPI to OPAIS right before your audit, you will likely be cited for a duplicate discount as the MEF is not updated at the same frequency as OPAIS. The illustration below outlines when information flows from OPAIS to the MEF 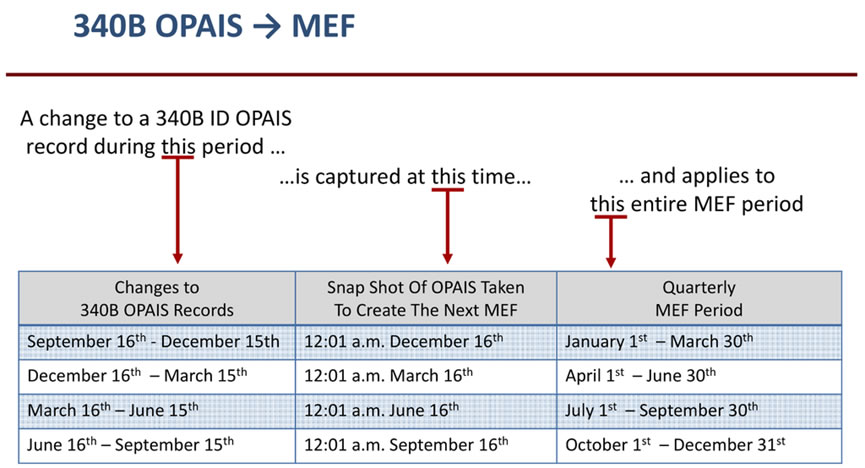 As the 340B program has become increasingly partisan, with a growing division between Republicans, who support program changes, and Democrats, who feel 340B should be left alone, the likelihood of changes to the program appears to be high. It is believed that Energy & Commerce bills will go to the House floor later in the fall. Consequently, 340B stakeholders should closely monitor House bills to ensure appropriate measures are taken to meet potentially new 340B requirements and appropriately communicate the implications of program reform to organization leadership. Additionally, in anticipation of HRSA potentially getting broader regulatory authority via the 2019 Presidential Budget, covered entities should review HRSA’s Omnibus proposal that was withdrawn from OMB to get a glimpse of some of the changes that might come into effect.

On or around July 12th, 2018 (in a private meeting) Secretary Azar discussed the potential of setting a standard 340B discount of 20% of list price which would significantly reduce the benefit of the 340B program to providers and patients. Congressman Collins (R-N.Y.), a vocal advocate for increased regulatory oversight of the 340B program voiced concern over this idea likely due to the number of 340B entities in his district. http://www.modernhealthcare.com/article/20180713/NEWS/180719945
The Alinea Group, LLC has prepared this information for educational purposes only. It should not be construed or relied on as advice or as creating any business relationship. Readers should not act upon this information without seeking advice from professional advisers. This publication may be disseminated only with our express prior consent, and all persons so disseminating or using this information release and agree to hold The Alinea Group, LLC harmless from any liability associated herewith.