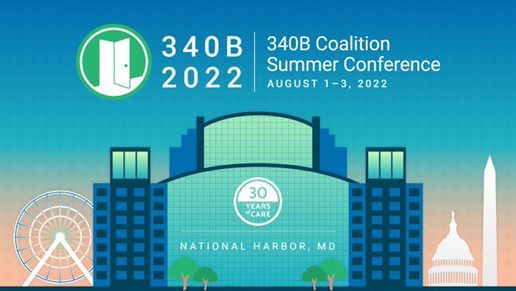 Our nation’s capital was buzzing with excitement this past week during the 340B Coalition Summer Conference. Stakeholders from across the country gathered together to network and hear updates on proposed congressional changes that will impact 340B, as well as testimonials from 340B covered entities working to mitigate savings losses imposed by manufacturer contract pharmacy restrictions. The conference offered many opportunities for representatives from covered entities to gather for roundtable discussions with other similar entities and unite in support of one another, employing the recurring message of the conference, “Tell your story!”. As the celebration of the 30-year anniversary of the 340B program continued, many sessions focused on what may be coming in the next 30 years, and how we must unite to protect the 340B program moving forward.

As HRSA’s enforcement authority remains in limbo, covered entities have seen changes in the types of audit findings being issued as a result of federal program audits. Though key elements of the 1996 patient definition are still reviewed by auditors, HRSA’s lack of enforcement authority is reflected in the reduction of Diversion findings being issued since 2019. Prior to 2019 Diversion findings for an ineligible location were predominant, and if a prescription was generated from a location not listed on a reimbursable line of the last Medicare Cost Report, it was a guaranteed Diversion finding.

In the current environment, many have described opportunities to potentially expand the patient definition, covering more referral based relationships, including provision of care through private practices. As many covered entities are feeling the impact of contract pharmacy restrictions, this could potentially be a way to mitigate the savings losses by generating additional eligible patient encounters. One speaker described a spectrum of risk from the strictest enforcement of the patient definition based on a visit with a credentialed provider at the covered entity and moving toward the least strict use of the patient definition to potentially qualify prescriptions generated from private practices if the patient was previously seen at the covered entity. No conclusive statements were made regarding how HRSA would potentially enforce any of these qualification practices, but the sharing of potential opportunities in light of the many challenges was abundant nevertheless.

One thing that was decisive during an update from HRSA was that their mission remains the same. Carole Johnson, Administrator, reiterated that HRSA’s focus remains on “ensuring oversight and accountability to ensure the 340B program is meeting goals”. She also stated that it is “critical that we continue to do the work to ensure resources are getting to the people who need the services”. She stated that this means holding everyone participating in the 340B program accountable, from the covered entities to the manufacturers.

It’s no surprise that median annualized 340B hospital losses have more than doubled since 2021, as 18 manufacturers are now imposing restrictions on contract pharmacy. Eighty six percent of community health centers use contract pharmacies according to NACHC, and 32% of patients would lose access to their medication without 340B. While it remains to be determined whether manufacturer actions will ultimately be found in violation of the 340B statute, 12 manufacturers have given desperate covered entities the option to share claims data in exchange for 340B pricing to be restored at all or some of their contract pharmacies.

While many entities are still holding out on sharing data, others have begun the cumbersome journey of gathering data from various TPA vendors, uploading it to a claims warehouse software, continuously communicating (and constantly waiting)  to attempt to have 340B pricing restored at their contract pharmacies. Given the choice, many entities would not share this information or carry the burden of such an immense task, but with no end to restrictions in site, it has become reality for many that they will no longer be able to appropriately serve their patients in the same capacity if savings are not restored.

340B Health has created a template for entities to express this type of “Financial Duress” to HRSA, in order to continue to provide data on how patients are being impacted. This type of documentation will be used during the creation of briefs for various litigation aimed at requiring manufacturers to reinstate 340B pricing. Entities should also continue to notify HRSA of overcharging, especially if they have shared data but pricing has not been restored. Additionally, entities are encouraged to continue to utilize the 340B Health Impact Profile to provide specific examples to congress on how covered entities are providing critical access to care for patients.

While waiting for 340B pricing to be restored, entities that have submitted claims data should work closely with their wholesaler to monitor for contract loads, as well as utilize the OPAIS 340B Ceiling Price Database to determine if the pricing has been reinstated. Also, in instances where a manufacturer has not specifically stated that it would make an exception to their restrictions, don’t be afraid to ask if it would benefit your entity, such as allowing pricing at a specialty pharmacy in addition to an in-house retail pharmacy.

Other considerations described to mitigate the manufacturer-imposed savings losses include:

Possibly the most noteworthy topic at the conference was the current state of prescription drug pricing reform in the senate. The senate budget reconciliation bill aims to cut medication costs and reduce drug spending by the federal government. The legislation would be enacted over several years and included provisions would allow the federal government to negotiate the price of high-cost medications, cap out-of-pocket costs for Medicare, and penalize manufacturers who increase drug prices faster than inflation.

Starting in 2026 Medicare price negotiation would begin which would reduce drug costs of the Medicare program by $102 billion over 10 years. Medicare would reimburse for drugs based on the negotiated Maximum Fair Price (MFP) plus 6% for Part B and plus a dispensing fee for Part D. Additionally, manufacturers will be required to pay a penalty if drug prices increase faster than inflation in both Medicare and private insurance markets. Unfortunately, this may cause manufacturers to then launch new drugs at higher prices to make up for losses or even disincentivize future research and development. Additional provisions of the bill would impact Medicare out-of-pocket spending for beneficiaries, basing out-of-pocket costs on the drug’s negotiated MFP and creating a $2000 out-of-pocket cap.

Negotiated prices are also considered “best price” for Medicaid and 340B programs. If the MFP is less than the 340B price, manufacturers will be required to provide the MFP to covered entities. However, when entities purchase at MFP and are reimbursed by Medicare, there will no longer be an additional margin as they will only be reimbursed at MFP plus a small percentage as described above. When purchasing at 340B, a reimbursement margin will remain, but it will be less than the current margin. There may also be operational impacts of negotiation such as a requirement to maintain a virtual or physically separate MFP inventory for Medicare patients and a non-MFP inventory for others, a model 340B entities know well.

As covered entities assess the potential impact of this new legislation, Jeff Davis, attorney at Bass, Berry & Sims, a Medicare and Medicaid billing and reimbursement advisor who presented on this topic at the conference, recommends covered entities consider in advance what the impacts of the drug pricing negotiation legislation would be for your program, as well as understand where to find data to determine how Medicare reimbursement cuts will impact your entity, and lastly, watch for developments in the Genesis lawsuit surrounding the patient definition which may have indirect impacts on your program’s revenue.

Many sessions described the media campaigns that have negatively targeted the 340B program, implying misuse of savings. 340B Health members have collectively been issuing a counter-attack to dispel the negative myths portrayed by PhRMA, various manufacturers, and program adversaries. Notably, U.S. Representative Abigail Spanberger also recently utilized a special order one hour session to describe how sixty percent of uncompensated hospital care and seventy-five percent of Medicaid hospital care is provided by 340B hospitals and costs zero dollars in taxpayer money. She went on to say that the 340B program should be celebrated, protected and defended as it allows our community hospitals to save and stretch federal dollars to provide care to thousands of communities and millions of patients.

Additional media coverage nationally and locally has described the impact that the manufacturer restrictions and discriminatory reimbursement is having by reducing patient access to care. One article from MetroHealth’s Dr. Sherrie D Williams described the 340B program as a “critical patient lifeline” to their public hospital that cares for many low-income patients. She fears the care paid for by use of 340B savings it is now “under threat”, as the estimated median loss for DSH hospitals is $2.2million per year according to a 340B Health survey.

During the conference, many covered entities told their individual experiences and encouraged others to do the same by demonstrating the value of the 340B program at their entities and continuing to let congress know how manufacturer restrictions and reduced reimbursement by payors is impacting patients.

The recurring message throughout the conference was that it is not enough to support other entities telling their stories, we must each tell our story. One session described ways to demonstrate value by collecting both quantitative and qualitative data on how the 340B program savings are used at your entity. This should encompass both direct impact through 340B drug cash plan savings programs which provide medications to patients at a lower cost, and indirect impact through the care provided in the community that would not be possible without funding through 340B savings. Whatever way your entity is using critical 340B savings, tell your patients, educate your organization’s leadership, contact your congressional representatives, tell your story!

*Author Anna-Marie Oakes is a pharmacist, 340B Subject Matter Expert, and 340B ACE. Anna-Marie has over 12 years experience in healthcare and brings first-hand experience from the covered entity perspective. For more information on Anna-Marie’s background, please visit Alinea’s team page. If you would like to inquire further with Anna-Marie on 340B, or other pharmacy-related matters, she can be reached via email at anna-marie.oakes@alinea-group.com